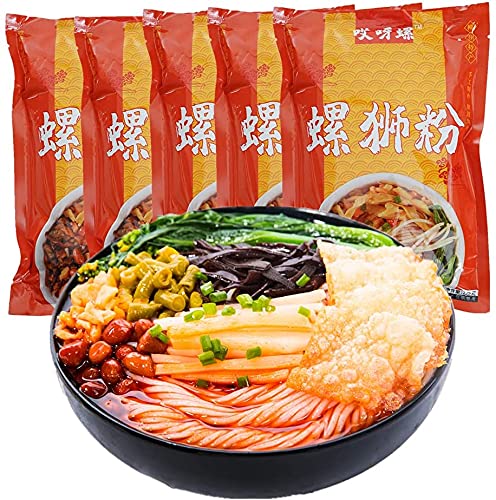 "li" "Luo Si Fen"has a sour, spicy, fresh, fresh, hot taste and the special smell of sour bamboo shoots-Liuzhou snail. So rice noodles are well known and have a special taste. Snail rice noodles have sour, spicy, refreshing, hot and fresh flavors, and are the first among Liuzhou flavor snacks. "li" But be careful, because the soup is very spicy, you may need to drink beer or something (unless you are suitable for spicy food)! In addition to snail soup and noodles, they usually come with peanuts, bamboo shoots and some vegetables. "li" For how to eat, please refer to the picture or the instructions below.

Snail noodles are snack rice noodles in Liuzhou City, Guangxi Zhuang Autonomous Region. It has a unique flavor of spicy, refreshing, fresh, sour and hot. It is the most famous local snack in Liuzhou. The deliciousness of snail noodles is also due to its unique soup. The soup is made from natural spices such as snails, snails, star anise, cinnamon, cloves, many kinds of chili, and monosodium glutamate. Snail noodles is a flavored snack in Liuzhou, Guangxi. It is made of rice noodles unique to Liuzhou, plus sour bamboo shoots, fungus, peanuts, fried yuba, day lily, fresh green vegetables and other ingredients, as well as moderate sour and hot flavor and boiling snail soup. With sour, spicy, fresh, refreshing, hot flavor and the special smell of sour bamboo shoots-Liuzhou Lo So rice noodles are well known and have a special taste. Snail rice noodles, with sour, spicy, refreshing, hot and fresh flavors, is the first among Liuzhou flavor snacks. -----------

How to eat: 1. Put the dry rice noodles and 500ml of cold water into the pot and boil until boiling. 2. Boiling for 5-8 minutes, use a bowl to remove the rice noodles. 3. Refill 500ml of water and boil until boiling. Put the yuba, quail eggs and the previously cooked rice noodles into the pot. 4. When the rice noodles can be broken with chopsticks, put the soup, sour bamboo shoots, capers, black fungus, and dried radish into the pot and stir. 5. Put in peanuts, chili oil and sour vinegar (the chili oil and sour vinegar are added according to personal taste), stir a little, you can add vegetables by yourself, the taste is better. 6. You can enjoy the delicious Luo Si Fen.